Beautiful, spectacular, awesome, never ending, scenic, picturesque, stunning…these words describe only in part the great ride we had from Apollo Bay, continuing along the Great Ocean Road after resting for a day on the beach.
Apollo Bay below. 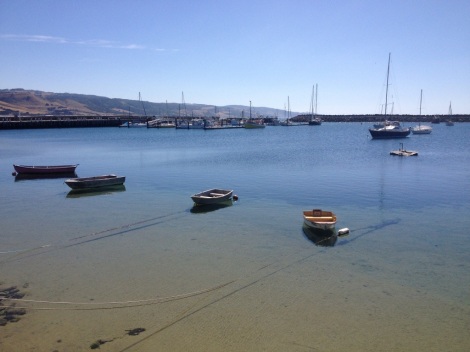 Compared to the climbing we had experienced getting to Apollo Bay, the hills in this section were easily ridden, not that we really noticed with the fantastic view we had the whole way! Every corner revealed more spectacular scenery. 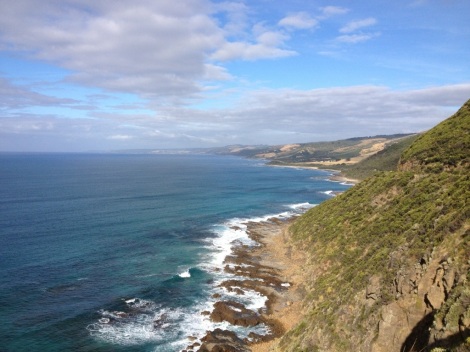 Around one such corner we found fantastic coffee and some cyclists.

We were planning on spending the night in Lorne, 45kms from Apollo Bay, but when we arrived we decided that, with its expensive, touristy feel, it didn’t have the right ‘ambience’ for two grotty cycle tourers who wanted a relaxing afternoon, so we headed off for the next town, Aireys Inlet.

Aireys Inlet looked quieter, but it seemed like you had to climb too steep a hill to get from the beach to the caravan park, so we pushed on.

Anglesea was okay, full of people, but not as bad as Lorne. We booked into the caravan park near the beach, and were given a ‘lovely’ campsite complete with pine bark, mosquitoes and March flies, along with lots of other people close by…not the most welcoming campsite we had experienced at over $40 a night. The beach was great though, and we spent a good while lazing around in the sun.

Resorting to cooking dinner near the camp kitchen (to get away from our unpleasant campsite) we met an older couple who were from nearby Ocean Grove and had done lots of cycle touring over the years. They advised us of the best way to get to Queenscliff while avoiding most of the traffic and provided some good conversation while we ate our garlic couscous and veggies.

The evening finished early as we retreated from the mosquitoes and March flies!