One way of transporting three bikes at once…

We were chatting with a couple of young men the other day when the topic of car ownership and motor vehicle use came up. One man was from France, and the other was from country NSW. Both were cycle touring for an extended period and had randomly met on the road a couple of weeks previously.

The Frenchman said he had sold his car while still living in France and found the financial benefits to be so noticeable that he did not ever want to own a car again. In fact, he became so enamoured with this new way of life that he started a non-profit organisation called ‘Altermoov‘, which promotes and advocates for alternative transport methods.

The Aussie talked about how he had not done much cycling prior to this trip, but he was now pretty well sold on bicycle transport, and could not see himself buying a car in the foreseeable future.

Cycle tourists aren’t the only people talking about a lifestyle shift that involves getting rid of the car. A young female customer recently sold her car and used a good portion of that money to buy a Brompton folding bike. 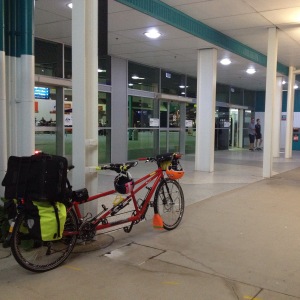 A man with a young family bought an electric bike from us a few months ago. He and his wife decided to sell the second car to rid themselves of that expense. Another, older, gentleman comes in to get his bike serviced periodically. He has been car-free for a couple of years and is now vehemently opposed to ever owning a car again.

We sold our only car about twelve months ago, so we understand this ever-growing desire not to be burdened by the expense as well as the health and environmental cost involved in owning a motor vehicle. We get excited when we talk to people of all ages and in all avenues of life who are coming to the realisation that the motor vehicle is not the answer to…well…most things!

We live in a car-centric society where everything is focused on making life easy for motor vehicle use. Roads, traffic lights, parking spaces are all designed to ease passage for motor vehicles. Advertising tells us if we buy a car we will look beautiful, be fit and healthy and have no financial woes. Governments sell policies that cater to the motor vehicle…more roads, more lanes, more car parking. Australia’s main form of photo identification is even a driver’s licence.

There appears to be a change in the air though. The previous examples of people deciding to go car-free or car-less are only a tiny portion of the people we have spoken to about this issue in the past few months. Altermoov’s Facebook, for example, has gained nearly 14,000 likes in less than three years. Riding a bike and/or not owning a car is becoming more recognised, more appreciated…riding a bike is becoming more normal.

As we start to recognise that a car-centric society is not the only way (and not particularly the best) way to live, change will happen. It feels like the change is slow, but it is happening…we have the bikes to prove it!

Taking cardboard to the recyclers with a Surly Bill Trailer

One response to “The Slow Shift – changing gears to a cheaper (and healthier, more environmentally friendly) life”