The morning came with the expected rain. We were pleased we could pack up our bikes under the annexe of our onsite caravan we had stayed in last night, and not have to deal with a wet tent.
Today was going to be the first time we had set off ready for a full day of rainy riding and we were quite excited! Coming from tropical North Queensland, however, we didn’t know how much credence we should give to the weather forecast of ‘humid’, and had to have an in depth discussion about what we should wear.

A day of rain was imminent!

We settled on wearing the winter gloves we had brought, as well as two long sleeve thermals and a raincoat. And of course, after a few kilometres we were way too hot and to take off some layers. A wind vest with a long sleeve thermal underneath seemed to provide enough protection without making us too hot in this ‘humid’ summer weather.

Cressy is only about 10km from Longford so we continued through despite Jen’s pleas for a morning coffee stop. We were on a mission to Campbell Town! It was only 65km after all, and this was the flat country…wasn’t it? 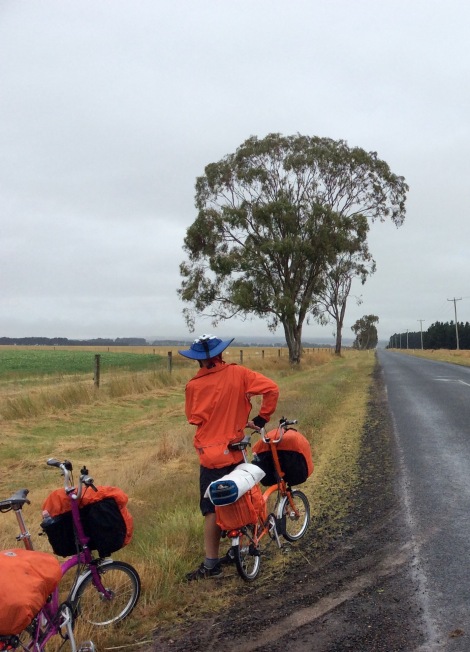 Somewhere along the road, which was lovely and quiet, not too hilly, we came across a sign pointing left towards Campbelltown and the A1 highway. This is the point you should always stop and consult the map to check before you make a decision. Maybe it was the lack of coffee, but before we knew it, and forgetting all about Keith’s instruction not to turn off until we reached Campbell Town, we had joyfully turned left and were unknowingly heading towards certain doom.

It was roughly 8km later when we first spotted the T-intersection…with cars…and trucks…and buses… We had reached the A1! The highlight was the big green sign that announced there was still 34km to go until Campbell Town! We had turned waaay too early!

After a brief rest while we ate an apple and considered our options, we decided we may as well just continue on. This would add 34km of highway travel to our day, but, surely it couldn’t be that bad.

We were wrong. It was AWFUL! There are sure to be worse roads in the world, but the close proximity of cars and trucks passing at 110km/hr (or faster), particularly when the traffic was quite dense and not feeling friendly towards two hapless cycle tourists, meant the fun factor had vanished. There was a bit of a shoulder, but much of it felt rough and it wasn’t wide enough to put much space between us and the vehicles. Even worse was the thought that once we reached Campbell Town, we would still need to ride another 46kms before we reached Oatlands! This was going to be a looong day!

After about ten kilometres of joyless riding, a roadhouse appeared and Jen stated that she was going in for coffee, no further discussion required. Even the coffee was bad, adding to our gloom, but soon enough that didn’t matter because as we were heading out the door a truck driver stopped to say hello.

‘Oh no, you don’t need to go down the highway!’ he said. ‘There’s a much quieter road across the street!’. Barton Rd was literally across the road from the roadhouse! We felt like weeping with relief. 8.2kms of wonderful, traffic-free riding later, we had reached the original Longford to Campbell Town road we had started on that morning.

Barton Rd, which saved us from more of the highway. This is the sort of road that makes cycling pleasant!

We were so relieved to be off the highway that the next lot of kilometres passed…not exactly quickly…but happily. When we reached Campbell Town we had ridden about 80kms, a bit further than the planned 65kms. After a lunch break, we stopped at the police stations to ask if there was ANY other way to Oatlands apart from the highway. When the answer was negative we asked if anyone could transport us there (hint, hint), but the policeman could not offer any other help.
Ross is only another 10km along the highway from Campbell Town, so we decided to just ride the next ten kilometres and seek relief from the Ross Bakery, a well known spot for delicious treats. We would consider stopping there the night before riding the final 36 kilometres to Oatlands.

Surprisingly the next ten kilometres passed relatively easily on the highway. There didn’t seem to be so much ascending, and it felt faster. We still enjoyed a famous vanilla slice and coffee when we got to Ross though! 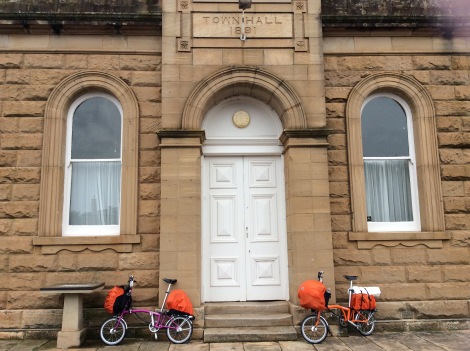 The visitor information centre in Ross is in the wool store. We replicated the policeman conversation with the owner of the wool store to no avail. She told us we would be okay, there would only be some roadworks to deal with, and she didn’t know anyone who regularly travelled between Ross and Oatlands.

It was a little after 3pm by this stage. We decided to stop trying to avoid the highway and just get it over with.
There isn’t too much to add about the highway journey except to say there were roadworks, some annoying, some good for us!

The roadworks effectively provided us with a protected bike lane! It was brilliant, but it didn’t last very long.

We had to ride up and over St Peter’s Pass. It wasn’t too strenuous but we were starting to get tired and slower the closer we got to Oatlands. The rain picked up too and became an incessant shower.

Oatlands is very quiet at night. We rode down the deserted Main Street at 6pm, after having ridden 127km, looking for an accommodation sign that said ‘vacant’. We were disheartened to see the pub had closed down and no other restaurant was open.

Happily there was a vacancy sign about halfway up the street. The owner told us the RSL were serving meals tonight and about an hour later we were showered, dressed up in raincoats, and heading up the road in the rain to the RSL! 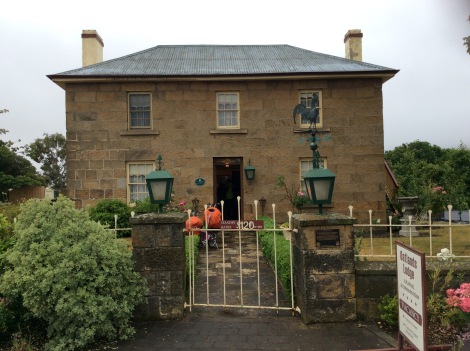