Whenever we mention dynamo lights on bicycles to people who are older than about 40, they tend to shudder with the memory. Old style dynamo lights had a significant impact on the effort required to pedal, and there are endless stories of failures…

An old bottle-dynamo on an equally old Gazelle!

Roll forward to 2017 and our experience of dynamo lights has changed dramatically for the better! With a dynamo light there is no need to worry about batteries going flat, or having to recharge with the USB connection. The lights are unlikely to fall off, which can be an issue with lights that are designed to be removed frequently for charging. Dynamo lights are also unlikely to be stolen as they are hardwired in and not an easy target.

For those who might not be sure what a dynamo light is, one wheel (typically the front wheel) is made up with a dynamo hub in the centre instead of a regular hub. 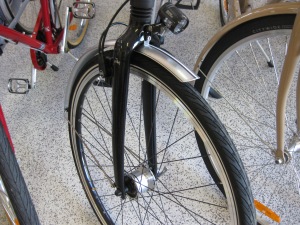 The silver hub in the middle of the wheel generates power when the wheel is turning, which powers the lights – no batteries required…

This hooks up to the light that is specifically made to be powered by a dynamo hub. The hub generates power when the wheel turns. Both the front and rear lights can be connected to the hub and powered by the one wheel. The lights come on when the wheel is turning and usually have a ‘stand light’ feature for safety, remaining on for up to 20 minutes after the wheel stops turning. This is useful when stopping at traffic lights or pulling over briefly on the side of the road.

We had already been admiring the benefits of dynamo lights for bicycle commuters and cycle tourers, but the the dynamo love affair really kicked in last year when I took a Vivente Anatolia to Tasmania for a two week cycle tour with my friend, Bec.

Note the white power cord connecting the USB port on the light up to the handlebar bag and into the iPhone – no more flat batteries…as long as you keep pedalling!

Vivente bikes all come with an SP (Shutter Precision) dynamo hub. The accompanying AXA 70 Luxx headlight has USB charging capabilities, which means that not only does pedalling power the lights, mobile devices such as phones during those hours of cycling from one place to the next. 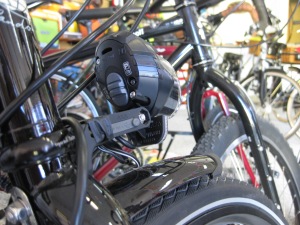 Headlight on a Vivente bike complete with USB charging port

The lights do have to be turned off in order to use the USB charging port, which means that all charging needs to happen during the day when you’re less likely to want the lights on. If you have ever done any cycle touring or cycle commuting however, you will appreciate the value of being able to keep your phone charged without having to find a plug! 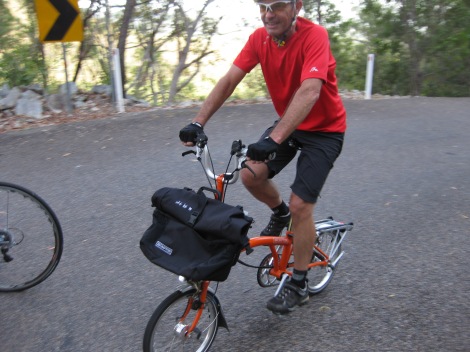 It was daylight, so the light didn’t really need to be on during this ride up the Paluma Range with friends. We always leave the lights on now – no worries about wasting batteries! The dynamo didn’t seem to make any difference to our hill climbing abilities…that is…we wouldn’t have gone any faster if it was turned off!

Our next dynamo light experience came with the purchase of our Brompton folding bikes. Dynamo lights are an optional extra on Brompton, and not a cheap one. We chose Schmidt SON hubs and we opted for the Busch & Muller Cyo Senso Plus lights. These lights don’t have the USB charging port, something we have slightly regretted as this was such a useful feature! 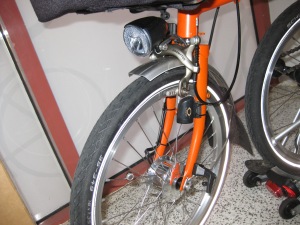 After using all these bikes with dynamo lights, we finally decided that the expense of building a dynamo hub into our tandem bike wheel would DEFINITELY be worth it. The red tandem is our family car and it takes us around at all times of the day and night. We fitted the same light as on the Vivente, complete with a USB charging port because we knew we would want this while cycle touring.

One of those evenings when the dynamo light on our red tandem would be greatly appreciated on a late ride home after a social afternoon at The Brewery.

We keep forgetting to take photos of our various dynamo lights when we’re riding at night, but plan to give some detail on how well they work in another post. Personally, we think the lights we have tried so far have been fantastic, lighting the road ahead with a steady beam, even if the darkest of settings. Keep an eye out for another post with details and photos of the lights at night…any time now!

What has your experience been with dynamo lights? Do you like the idea of powering your own light without having to worry about batteries or charging?