Last Sunday we rode the furthest distance we have ever ridden in one day. Trent, Paul and Sarah came with us for a long day of pedalling complete with rain, headwinds, dirt roads and endless kilometres…

I don’t know how it happened, but a few months ago we suddenly started talking about doing loooong rides. Like 200, 300 or more kilometres. In one day. Or one ride at least (as far as we know it is near impossible to complete distances over 300km in less than 24 hours!). Audax is the organisation that runs these type of events, and we scoured their website with enthusiasm, reading the guidelines and generally agreeing with the philosophy of these non-race events.

When we suggested our 210km plan to others, they were either keen or horrified. We could understand the horror, but we were excited at the thought of one whole day of pedalling out in the wild blue yonder. If we couldn’t get away for a proper cycle tour, why not pretend and do the whole trip in one day?

Our route was essentially a loop from Townsville to Mingela, right onto Dotswood Road, then right again onto Hervey Range Road and home to Townsville. Dotswood Road is 70kms long and is a good dirt road (at least it is good when it has just been graded!). We had done this route in the reverse direction before, with a stop halfway along Dotswood Road at Fanning River. There was to be no overnight camping this time unless something went terribly wrong.

At 5am on Sunday morning we were met by Paul and Sarah, who rode their tandem, and Trent, riding on his solo bike. It was fairly warm due to the cloud cover and imminent rain.

There weren’t too many cars on the road at that time of the morning, just a few road trains with three or four trailers. The reflective sidewall on our Schwalbe tyres as well as everyone’s Ortlieb pannier reflectors worked well. Mick and I wore our high-vis vests too, part of the Audax requirements and a pretty good way of being seen on the highway in the dark.

Not so reflective once the sun rose, but still a good source of entertainment for some.

Our first stop was at Calcium service station, now a Super7, about 52km from our start point at The Bicycle Pedlar. Calcium is a regular stop when we head out in that direction as you can get drinks and hot food, water and toilets.

Rain, wet clothes and air-conditioning don’t go too well together. We froze sitting in the store and were happy to get going again after a quick feed. 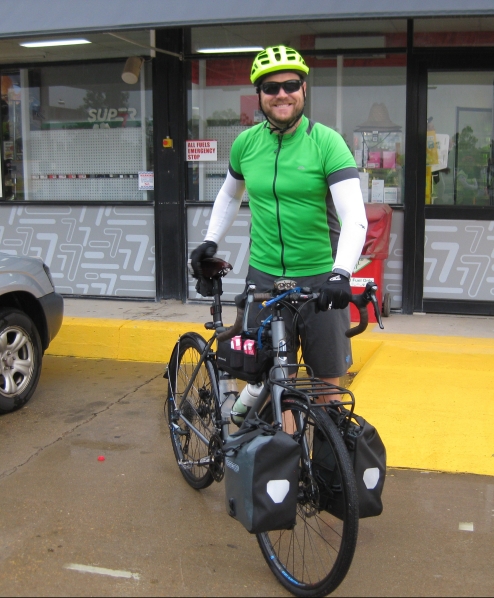 It’s another 30ish kilometrest to Mingela, with the  3-4km climb towards the end, just before the Mingela turn off. Mingela has a pub (probably not open early in the morning) and a public toilet along with ‘non-potable’ water. We just stopped on the roadside for a quick snack and to regroup. It was there we discovered the irrelevant but amusing (at the time) fact that both Mick and Paul both had purple socks on…

Turning onto Dotswood Rd at the 88km mark felt wonderful! Practically no traffic, good dirt surface and peaceful countryside in every direction. The air even smelled better! 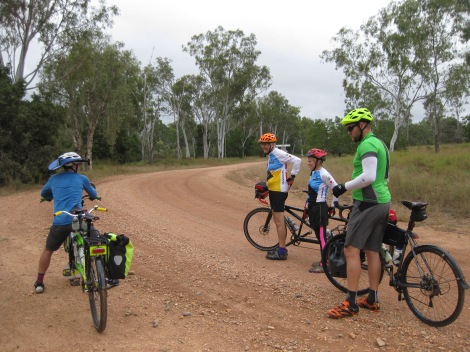 Our old campsite at Fanning River (we had done about 115km by then), no longer looked like a practical camping spot. It had obviously had some good water come through since our last visit and was overrun with tree branches and shrubbery. 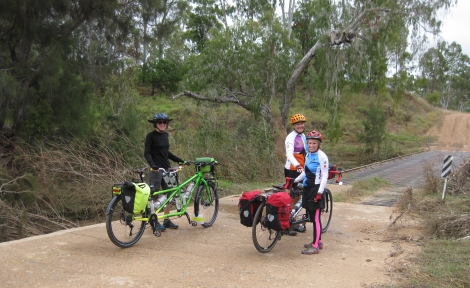 Fanning River – the grid bridge has some seriously wide grid action going on and we always walk across rather than take the risk.

This meant it was no good as a lunch stop either so we decided to push on to Keelbottom Creek. We remembered this as a beautiful spot with running water and shady trees…it was just around the next corner…over the next hill…maybe the next corner…

Lunch ended up being here, at the ‘Dip’ sign on the side of the road so we could lean the bikes against the post. We couldn’t wait any longer for that bloomin’ creek to turn up!

Stories are always better in the re-telling, and we had obviously retold our previous Dotswood Rd stories so many times we forgot just how far it was between Fanning River and Hervey Range Rd. We were only a few kilometres out (it was about 40km, not 35km) but the best bit of our story telling was the bit where we said it was only 10-15km from the end of Dotswood Rd to the Heritage Tea Rooms!

Everyone was still smiling when they got to the end of Dotswood Rd at the 156km mark. After all, the Tea Rooms were only about 10-15kms away and it was still only 2pm! We would get there in time to order that steak burger or cheese toastie (the Tea Rooms stop cooking hot food at 3pm but still serve coffee and cake until 4pm).

There are no photos of this section of the ride. I will leave it to your imagination. This was like trying get to Keelbottom Creek for lunch, but much worse. We hadn’t had a break since lunch, our bums were starting to want a rest and our stomachs were growling…and that 10-15kms seemed to be taking a long time!

It wasn’t all bad. The scenery was magnificent and there were occasional heavy showers of rain which kept things cool, even a little cold. The lack of sun meant it was perfect cycling weather. Apparently the road generally descends towards the Tea Rooms, but it had plenty of ascents to keep us interested.

Eventually however, we started getting desperate. The 10km, 15km and 20km mark all passed by with no sign of the Tea Rooms. Every downhill led us to another uphill and yet another corner…that led to another down…and up….

THIRTY kilometres later, we rolled into the Heritage Tea Rooms, having done 190kms , soaking wet from the rain, freezing and deliriously happy to have made it here…even if it too late for anything other than coffee and apple pie. We weren’t too delirious to realise that it is about 35kms from the Tea Rooms to Townsville, and that 190kms plus 35kms equals more than 210km…this ride was turning out to be EPIC!

When we got up to leave about 4pm, extra clothing was donned, ready for the rapid descent down Hervey Range, which would be freezing in our wet state.

Of course this gear was shed pretty quickly once we reached the flats again and all that was left was the 35kms back into town. 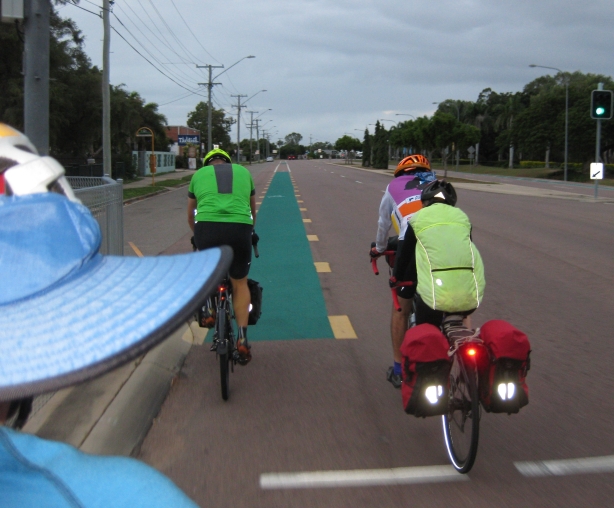 By the time we reached The Bicycle Pedlar again, we had clocked up 230kms on our cycle computer, including those beautiful 70kms of dirt road, and it was dark again… 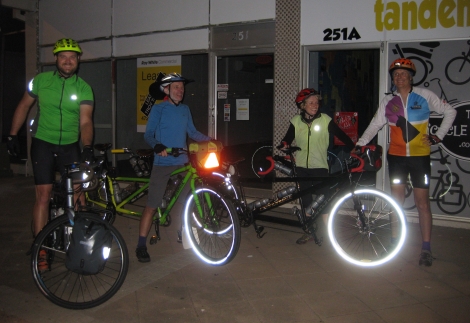 What a ride! We experienced sporadic rain all day, headwinds most of the day (well, it felt like it!), and some bumpy and sandy, but still pretty good quality, dirt road. We were all knackered, but we knew it would only be a matter of days, even hours, until everyone starting planning again….