I was awake at 4.20am the next morning with a very full bladder and freezing cold. All night I had woken in fits and starts trying to get warm and trying to find a position that wouldn’t force me into going outside the tent for a pee. Now I was awake I decided I may as well get up and on the road early.

Packing by torchlight (Luci solar light actually) worked fine, although I had a moment of doubt as I rode off, thinking I should have done a last check of the ground (that professional cycle tourer status was still proving elusive). At 5.30amish I was at Holden’s Bakery ordering a pie (just for Mick) and a coffee.

I had a good excuse to sit around as the sun didn’t seem to rise until around 6am and I had no desire to ride in the dark unless absolutely necessary. The pepper steak pie was delicious and after some flaffing around and chatting to Mick on the phone, the Vivente and I were riding into a glorious sunrise around 6.30am.

The Vivente Gibb has a Rohloff hub and a Gates belt drive, which means the gears are in an internal hub with no derailleur, and the Bike has a ‘belt’ rather than a chain. This was proving to be wonderful in a number of ways. Chains require lubrication to work efficiently, which is fine and I can do that, but I also inevitably end up getting that grease on my leg, or my shirt when it hangs up to dry on the bike, or some part of my touring equipment. I had really noticed this small benefit of the belt already on this trip.

Gear shifting with the Rohloff hub is sooo simple. I had laughed with Mick about the fact that you can’t get ‘granny ring shame’ with a Rohloff, because no one knows which gear you are in. The internal hub gear system means there is no switching between small and big chain rings on the front, just a simple 1 – 14 range on the rear with a right-hand grip shift. I also have a dodgy thumb knuckle from a past injury and find it gets sore when shifting gears all day on the normal thumb and index shifters (whatever they’re called).

Another surprise for me was how much I was enjoying the trekking bars. A couple of Vivente models come with a choice of flat bars or trekking bars and I had chosen the latter for another attempt. My dislike of having hands away from the gears and brakes had previously prevented any good use of the trekking bars, but I was finding them to be really valuable on this trip. When I felt less comfortable with traffic, I would ride in the ‘flat bar’ position, ready to brake quickly if needed, but the rest of the time I was enjoying moving my hands around into different spots on the bars. 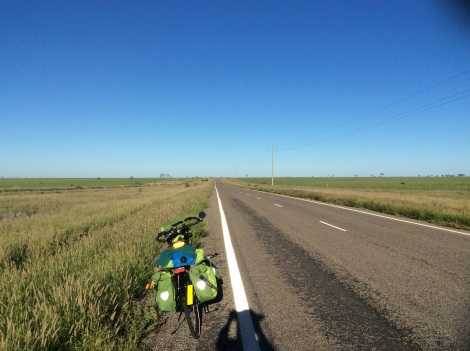 Leaving Hughenden, the land became the flattest it had been so far. The grasses grew right up to the edge of the road and protruded over in an attractive fashion, giving the effect of a manicured pathway. Grasses were the only vegetation close by however, with a rest area providing the only shade all day.

Consequently, Richmond felt like an oasis when I arrived around midday. As I stood in the shade outside the visitors’ centre, taking off my helmet and gloves, the water was gurgling in a man made stream right next to me, a very pleasant sound after a few hours with no shade or respite from the hot dry weather.

First port of call was the supermarket (there are two, right opposite each other) for a cold drink and some food supplies. Second stop was the ‘clothing, hardware, haberdashery, anything’ store to see if I could find a blanket or something to keep me warm at night. I hadn’t brought a sleeping bag with me thinking that it would still be warm out here. The days were very hot, but the nights had been freezing and I needed something to keep me warm!

Thankfully there was one fleecy ‘throw’ blanket in the shop. It was supposed to have Batman on it and had no price tag, but still, I was happy to pay the $14 for the comfort it was going to offer!

For $14 I also got a good chat with the owner of the store, a woman who had been in Richmond forever and had the shop for 40 years. She owned a few shops in the little town, including a gorgeous house/business premises I had passed down the road with pressed metal ceilings and ‘full of character’ for $150,000 (if anyone is interested). Her ‘all goods’ business was also for sale, although she didn’t know what she would actually do if it did sell. I got to hear about her son and family, granddaughter’s graduation and more, all while sitting on a stool longing for a cold drink.

The council run caravan park bordered the man-made lake and had lovely lush green grass. I got to camp in the shade of a tree, which was good because it was hot. Too hot to sit around in at the caravan park, so I headed down to the Federal Hotel for a cold beer.

In classic old style, the pub had wide open doors and windows, with timber floors and a fantastic bar that was the centrepiece in the room. It was lovely and cool sitting inside with the outside breeze blowing in. I discovered the hotel had free wifi, which was useful as the cheap(er) brand charging cord for my iPhone had decided to stop working and I would soon lose the ability to use the (stupid!) thing. This wouldn’t pose a problem between towns, where there is no Optus reception anyway, but would be a pain in town when I was trying to update the blog or let Mick know I had arrived.

On duty at the pub that afternoon was a young woman who had moved from Adelaide to take a job on a station only 208km out of town. She had worked for a few years in the area, governessing for one family, putting up fences for another, before taking work in town at the pub when things got tough and there was no work on the station. The friendly young woman was working part time at the local NAB bank branch and thought she might get work at the Elders real estate agency in the coming weeks. She was optimistic about her future and enjoying taking opportunities as they arose.

Brian set up next to me at the caravan park later that evening. In contrast to the young woman at the pub, Brian had been reduced to his car and camper trailer 2 years earlier when his wife left him and things fell apart. He was 69 and figured he had twenty more years of living out of his car. It was hard to tell if he was happy to be out on the road living ‘the simple life’, or if he was simply trying to work out what to do with himself. 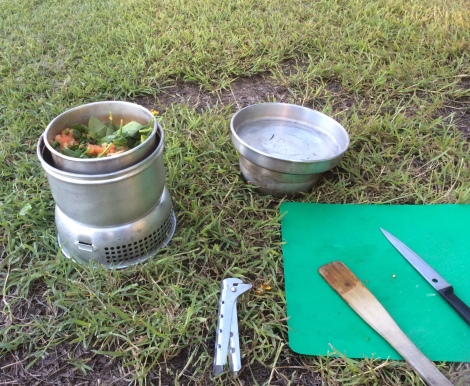 Dinner was rice with a bowl full of spinach, mushrooms and tomatoes. Bedtime came early again, once darkness fell I was in bed with the lights out (fleece blanket at the ready)!

One response to “Hughenden to Richmond”