The last post finished rather abruptly because we were hot and hungry and tired. That was the first day we had experienced on this trip that was really hot and it surprised us a bit. Add that to the beautiful barrenness of the outback country we were riding in, and a wee bit of desperation did start to creep in.

One thing we love about cycle touring however, is that as long as you can grab a bit of shade and have access to water and food, the day can be much improved. We found this at the Windorah Caravan Park, a council operated park with great amenities. Plus, it only cost $6 for a tent site! The council worker we saw pulling out the weeds on the footpath was the same person who came around each day collecting money. She also zoomed around town in a ute tidying things up, making repairs and doing all sorts of odd jobs. 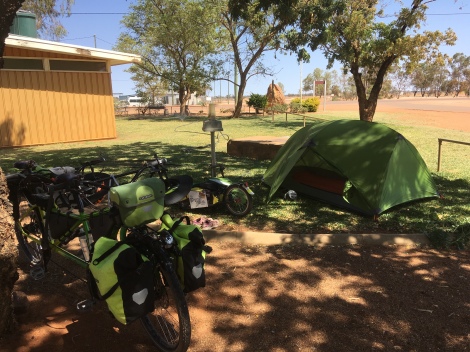 Windorah Pub served up a great hamburger and beer for our lunch after we had set up the tent and showered. There were a couple of Irish backpackers doing their three-month stint in the hotel and it was interesting to hear their perspective on the place.

Beer was a bit expensive though, similar to the Outback Store. It didn’t matter to us, on a bicycle you have to take what you can get. Prices in other outback towns further on however, did make us wonder why Windorah was so expensive.

A rest day was in order and we mooched around in the morning. It was while we were sitting at a picnic table in the middle of the Main Street that we noticed a mulberry tree full of an amazing amount of fruit. It wasn’t long before the owner had us in to have a feed of mulberries, gave us two big grapefruit, cups of tea and biscuits and invited us for dinner! Out of respect for their privacy we won’t include their photo, but we would have loved to, they were so kind to us. 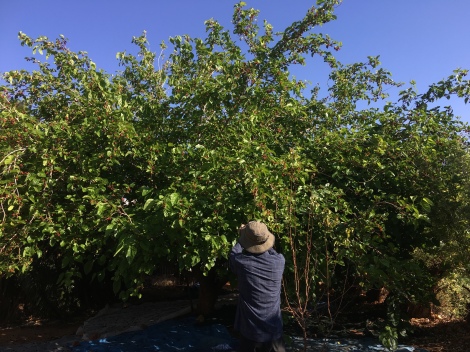 This encounter with two friendly and kind locals was the highlight of our stay. Dinner was the famous Yellow Belly fish, caught in Cooper’s Creek and cooked on the BBQ along with homegrown vegetables and salad. It was an absolute delight to sit and chat for a few hours before heading off to our tent. This was country hospitality at it’s best! Tomorrow we were heading off to Jundah, another small town 100kmish along. 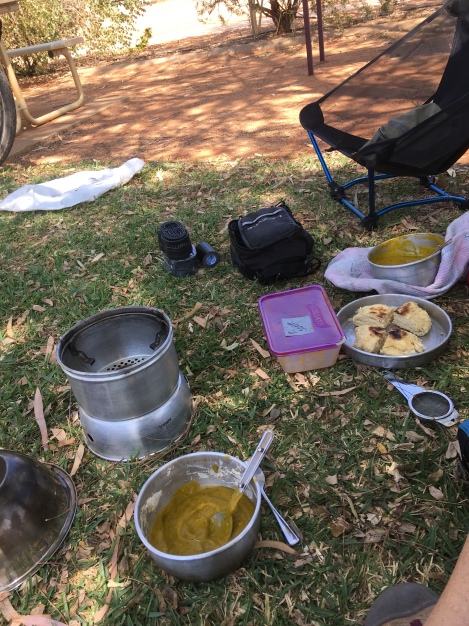